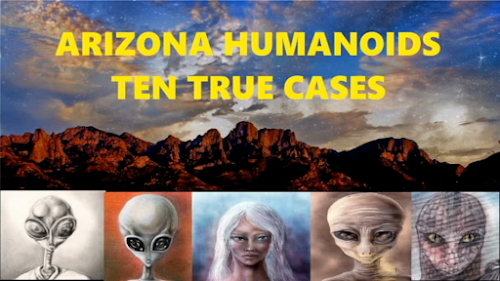 Face-to-face encounters with humanoids and onboard UFO experiences are the cutting edge of UFO research. Cases like these teach us the most about extraterrestrials, who they are, where they’re from, and their agenda on our planet. Humanoids come in all shapes and sizes, and encounters with them are surprisingly varied. People all over the world have been having encounters with humanoids for a very long time. Each location on the planet has a long history of humanoid encounters. One area with a surprisingly rich history is the state of Arizona. What follows are ten cases from the Grand Canyon state, each with its own insights into the nature and origins of the UFO phenomenon.

AN ALIEN ON THE ROAD: On June 9, 1960, a woman was driving with her husband and two children east of Globe. Everyone but her was asleep when she saw what appeared to be a young child about to cross the road. Then it turned its head and what she saw shocked her: the figure was not human!

GROUP OF MUSICIANS ABDUCTED: It was 1968 when a group of musicians finished a gig in Phoenix, and drove out of town to party. Without warning, a UFO appeared and hovered overhead. The next thing they knew, they were being examined by gray aliens.

ABDUCTION IN THE WHITE TANK MOUNTAINS: On June 20, 1980, three women traveled to the White Tank Mountains to investigate recent UFO sightings. Suddenly strange lights approached and all three women fell unconscious, then woke up hours later. Under hypnosis, one of them recalled being taken onboard, where she was given profound messages from the ETs.

UFO ENCOUNTER IN JAKES CORNER: In August of 1987, five people were outside their home in Jakes Corner when they saw a UFO rise up from a mountain and hover overhead. Then it moved over their home and stayed there. At this point, all but two of them went inside, and a bizarre encounter ensued during which the ETs showed a strange interest in the men’s feet.

THE RUBY ALIEN: In August of 1988 Sam visited an abandoned ghost town in Ruby, near the southern border of Mexico, he heard a strange whooshing sound overhead. Nothing strange was visible, but shortly later, he was amazed to see a short humanoid wearing a weird jumpsuit standing nearby. Sam just happened to have a camera, and he quickly snapped a stunning photograph.

A RIDE ABOARD A FLYING SAUCER: In the late 1980s, a retired pilot was driving through the desert near Cave Creek when his car stalled. As he checked the engine, a handsome blond man walked out of the wilderness, announced that he was an extraterrestrial, and offered the man a ride aboard his flying saucer.

CONTACT IN SOUTHERN ARIZONA: At 2:00 a.m., on February 20, 1991, Sheri was woken up by a huge UFO hovering outside her home. She then found herself being taken onboard where she met several different types of ETs, who gave her strange silver medicinal pills, and also a mineral sample. Sheri saved both and handed them over to researchers. Then there were the photos!

ONBOARD ENCOUNTER IN DEWEY: On September 28, 1991, Leslie woke up in her home to find her bed surrounded by grays. More stranger-looking ETs appeared, and Leslie was pulled through the wall of her home into a craft. During the encounter she was taken to the other side of the world and deep into the ocean. It was an experience which would leave her utterly transformed.

TOUCHED BY A GRAY: In February 1997, Louise and her husband moved into their new home in Chandler. One month later, three grays appeared in her bedroom. One of them stepped forward and touch Louise on the forehead. She blacked out only to discover remarkable evidence of her close encounter.

SOMETHING NOT FROM THIS WORLD. In February 2005, after a long day working at the local ski resort, Eric woke up in his home in Flagstaff to see a gray alien standing over his bed. Freaked out, he flipped his middle finger at the ET and blacked out. Only a few weeks later, he received startling confirmation that he wasn’t the only one in his family having encounters.

These ten accounts provide an accurate representation of humanoid encounters. They show how truly bizarre and varied contact with extraterrestrials can be. They show that encounters can occur anytime and anyplace, and can have a profound effect on a person’s life.