Visits to King of Ant People and Ancient Moonbase 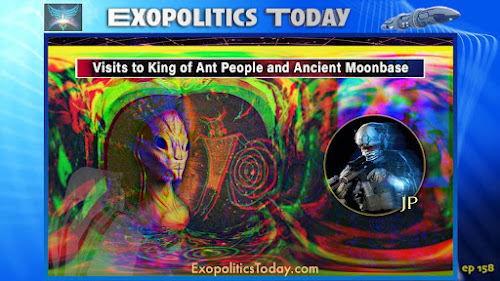 Visits to King of Ant People and
Ancient Moonbase

JP currently serves in the US Army and recently completed a mission to an underground Florida location as part of a team of eight covert military personnel seeking information about a sleeping giant discovered at another nearby underground facility. At the entrance to an underground city his covert team was met by security personnel from a civilization of humanoids with distinctive Ant characteristics (aka “Ant people”). JP’s team was then led into the base, where they eventually met with the Ant people’s King.

After the seven other members of his team was asked to leave, JP was given a private audience with the King who told him that their civilization was opening up to the rest of the planet and would soon be permitting more people to visit their underground facilities in Florida and elsewhere. Once his mission to the underground Ant civilization was completed, JP went on another Moon mission where he saw the ancient ruins of an underground city that was built by the Ant people.

In this Exopolitics Today interview, with Dr. Michael Salla, JP describes what the Ant people intend to do shortly, and why they feel it important for them to reconnect with surface humanity, and introduce us to the true history of the planet.

Facebook
Twitter
WhatsApp
Telegram
PrevPreviousN. D-Aignant, V. Joron explains that Von der Leyen is summoned before the Covid-19 Commission of the European Parliament, Pfizer lobbyists denied access. – The Informant
NextThe Ukrainian General Staff regrets that the aerial alarm was not triggered in time, while the Russian drones approached unnoticed and struck the Ukrainian territory. – The InformantNext