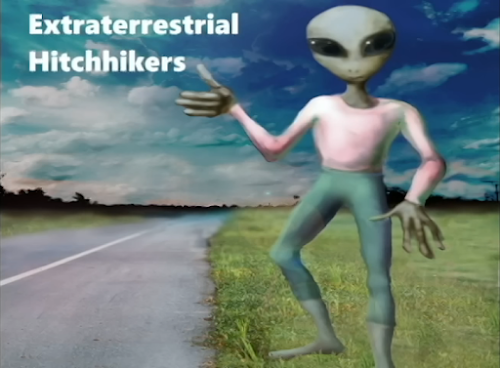 
Imagine driving along a remote highway and you see someone stick out their thumb, asking for a ride. You don’t pick up random hitchhikers, but for some reason, you feel compelled to stop. The hitchhiker, you now realize, looks weird, is dressed strangely, and starts to behave in unusual ways. Suddenly you realize that the hitchhiker is not human. This may sound crazy, but the fact is, there are more than a dozen cases on record that fit this exact pattern. Extraterrestrial hitchhikers! It happens more often than you think.

1956: Army officer Virgil Atkinson is driving along the Pacific Coast Highway in Santa Monica, CA when he picks up two young sailors. After dropping them off, he finds himself being followed by a UFO.

Oct 10, 1967: Norman C is driving to his home in Lakewood, CO when he is stopped by an odd tall man alongside the highway. The man begins asking him very odd. As the man walks off, a gigantic UFO appears overhead.

Mar 1973: Frank Bales is driving through WA when he stops to pick up two tall strangers wearing white robes. Frank is amazed to see that they have six fingers on each hand! The hitchhikers give him predictions and tell him they are “the Watchers.”

1973: Musician Steve Boucher is driving with his fellow musicians along a highway in Ontario, Canada when they pick-up a hitchhiker. The next thing they realize, a UFO lands on the road in front of them, and the hitchhiker is leading them onboard the UFO.

Oct 18, 1974: Edmoana Toews and Nuria Hanson are driving through a remote area of British Columbia, Canada when they are followed by a UFO. At some point, they feel compelled to give a strange hitchhiker a ride. So begins an ordeal that leaves them convinced that the man was an ET.

1978: Gina and Lois traveling to Phoenix, AZ see a strikingly handsome blond-haired, blue-eyed man thumbing a ride. They never pick up hitchhikers, but can’t stop themselves. The man tells them to have no fear when their car is levitated off the road and into a UFO.

2004: An anonymous pilot driving through the remote desert outside of Yuma, AZ stops to give a man a ride. As they converse, the hitchhiker reveals that he is an extraterrestrial in disguise, working on Earth to help humanity.

Jul 25, 2001: Irina and her father drive near Mishor, Ukraine and see a very handsome man on the side of the road asking for a ride. They give the man a ride. The next thing they know, they are paralyzed, lose control of their car, and discover that the hitchhiker is actually an alien.

Jun 12, 2003. Mr. Zilmerman is on his way to work in Limeira, Brazil when he feels compelled to stop and pick up a hitchhiker. The man in his car is not normal. He is very short, has cat-like eyes, a bald head, a pale oily complexion, smells awful and wears a one-piece tight jumpsuit with bizarre thick-soled shoes. He’s definitely not human!

2004: Mr. O.B., drives near Salisbury, VA and picks up a hitchhiker. O.B., is shocked to see that the man has huge eyes, pale skin, thin blond hair and unusual features. He warns O.B. about the dangers of our political system. From there, things get weirder.

Undated: Dakota is driving between Window Rock and Chinle, AZ and stops to give a man a ride. He now sees that the man is very odd-looking, with thin limbs, very pale skin, and is wearing a shimmering white jumpsuit. Next, they come upon a flying saucer blocking the road.

Undated: Four men leave a wedding reception near their home in Guatemala City when they agree to give a man wearing a cowboy hat a ride. Shortly later, they find themselves confronted by a UFO. The hitchhiker disappears and reappears, and leads all of them onto the UFO.

Aug 1, 2018: An anonymous trucker driving through Corsicana, TX sees a tall, thin, green-skinned figure standing alongside the highway as if looking for a ride. Shocked by the man’s strange appearance, he doesn’t stop. But luckily, he does have an operating dash-cam, which captures the entire incident on video!

With more than a dozen cases, it is clear that this is a thing. Aliens are hitching rides from unwary drivers all over the world. In case after case, the people who have this experience find themselves taking a route they don’t normally take. When the hitchhiker appears, they feel compelled to stop and pick them up. Only then do they notice that the hitchhiker is strange in appearance, dress and behavior. In many of these cases, the drivers end up being taken onboard a UFO! It is one of the most bizarre types of UFO encounters on record, and yet, the chances are, the cases presented here are likely just the tip of the iceberg.