UFOs-Disclosure: Interview with a Fully Conscious UFO Contactee Part One: The Awakening. 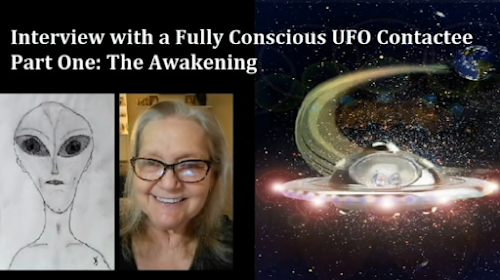 Interview with a Fully Conscious
UFO Contactee Part One:
The Awakening

Late one evening in January of 1973, fourteen-year-old Dolly Safran (who lived near the Everglades in Florida) looked outside her window to observe more than fifty star-like objects swarming overhead. As they began to dart off in different directions, one of these objects dropped down and hovered at treetop level behind her house.

The object now revealed itself to be a solid metallic craft, with portholes. And through the portholes, Dolly was shocked to see two short, gray-skinned figures with large dark eyes and huge black heads. Aliens, she realized, and they were looking right at her! She turned to dive under her bed. At that moment, her room exploded in brilliant blue light.

The next thing Dolly knew, hours had passed and morning had arrived. Dolly found herself on the floor of her room, dressed in someone else’s pajamas, which were on inside out and backwards. She had been taken, she realized. It had happened again.

Throughout her young life, this sort of thing had happened several times. But this time, she resolved to remember. And when the radio came on and said that there had been other witnesses, Dolly got the confirmation she needed. She wasn’t crazy. She really was seeing UFOs.

She sat down in the bathroom and began to concentrate, meditate, focus. And all at once, the wall of amnesia started to crumble and memories of being taken onboard the craft flooded into her mind.

Dolly had to go to school that day, and she received further confirmation when her best friend also reported seeing a UFO on the same night. By the end of the day, Dolly remembered everything that had happened to her that night. And not only did she remember that night, she was able to recall the many other times she had been taken, going all the way back to her first contact event when she was only ten months old and she floated right out of her crib.

Suddenly, all those weird events of missing time made sense. Dolly recalled many other instances of contact. She recalled the time at age two where he was missing for two hours and was found six miles away from her home. She had been taken.

She remembered an incident at age six when a craft came down and took her from the front yard of her home. She recalled many other instances too.

But her experience at age fourteen changed everything. She recalled being taken onboard the craft and meeting short little grays, and a much taller gray she called “Momma.” She was given a tour of the craft. The craft itself was a living being, and Dolly recalled meeting him many times. She called him “Tlera.”

During this onboard experience, Dolly was taken to the control room, which the ETs called “the place of movement.” She was instructed to sit in the pilot seat and to her amazement and delight, the craft left Earth and they traveled to Saturn. After exploring Saturn’s rings and many moons, they traveled to Earth’s moon, actually landing upon its surface.

Dolly had a long conversation with the ETs, and they offered her the opportunity to learn from them and work alongside them. She was given the freedom to choose any subject she wanted to explore. “Can I learn how to fly the craft?” Dolly asked.

The ETs agreed. And so began Dolly’s lifelong experiences as a fully conscious UFO contactee. She soon began having fantastic adventures including visiting large motherships filled with plants and animals, traveling to other planets and star-systems and meeting with a wide variety of ETs. It was a fantastic adventure that is still going on to this day.

This video presents Dolly’s story up to age fourteen, including many of her childhood experiences, and her incredible awakening at age fourteen where she was taken onboard the craft and then traveled across the solar system, starting a lifetime of fully conscious contact.

Dolly’s story of extraterrestrial contact is one of the most extensive and profound cases on record. If you would like to explore more about her many UFO encounters, you can read about them in my new book, “Symmetry: A True UFO Adventure.” Now available!

Part Three:
Extraterrestrials I Have Met!

Part Four:
Worlds I Have Seen!