Do ETs Have the Cure for Cancer? 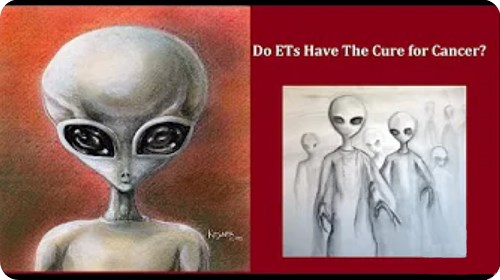 Do ETs Have the Cure for Cancer?

Do ETs have the cure for cancer? The answer appears to be, yes! In fact, there are more than 30 documented cases of people who claim to have been cured of cancer by extraterrestrials. Even more astonishing is that several contactees have been given information about the causes of cancer and how to cure it. As these cases show, ETs have incredible healing abilities and knowledge.

In 1975, Florida councilwoman Lynne Plaskett was diagnosed with T-cell lymphoma. Despite treatment, her cancer worsened. The doctors said her case was fatal, and that she had three months to live. Then one evening she was lying in bed. The room filled with mist and a strange buzzing sound. Plaskett found herself being levitated off the bed. Then a small silvery disc appeared and made three sweeps over her body. Plaskett was unafraid and felt a sense of warmth and relaxation. The disc departed and she felt into a comfortable sleep. Her next visit to the doctor revealed an incredible shock. As Plaskett says, “Tests showed my cancer was disappearing and now I’m in total remission.”

In February 2009, an incredible series of events occurred at the Pyrenees Children’s Hospital in Andorra, Spain. As witnessed by fourteen doctors, nurses and hospital employees, two small large-eyed extraterrestrial beings appeared in the children’s oncology ward where several children were suffering from terminal cancer and were expected to die within weeks. They walked into the room of seven-year-old Juan Lopez and healed him of leukemia. Over the next few weeks, the ETs returned. Each time they chose a young child who was on the verge of dying from cancer and healed them. Maria Munoz (age 9,) Anita Pena (age 8,) and Hector Gomez (age 9,) each received a miraculous cure. This was verified by doctors, who shared the events with UFO researchers.

Equally amazing are the cases in which ETs have shared information about their abilities to heal cancer. This happened to Kathleen Compardo of Pittsburg, Pennsylvania in 1950. She was lying in bed when two transparent figures appeared at her bedside. The figures were about three feet tall and told Kathleen that they were friendly aliens who wanted to help Earthlings, but were afraid of their war-like ways. They said that they were “far advanced in the fields of science and could cure cancer with a simple machine.”

Another case is that of Cynthia Appleton of Aston, Birmingham in West Midlands, England. In 1958 and 1959, Appleton had four separate contacts with a human-like ET. The ET provided all kinds of information. During her contacts, he also gave Appleton a method of curing cancer, and told her that one effective method of treatment involved “shocks to the body organ most in use at the time, creating a sort of frequency change in the vibrational rate of the particles inside the atom.”

Then there’s the case of Orlando Jorge Ferraudi of Buenos Aires, Argentina. In 1956, Ferraudi was taken by ETs to an apparent underwater base. They shared a huge amount of information to him, including a method of curing cancer. Although he had no medical education, Ferraudi wrote a treatise titled, “Cancer: its origin and development.” Investigators were amazed because the information was very similar to a theory about cancer later published by Nobel Prize winner, Dr. Albert Szent-Gyorgyi.

In the 1950s, two women from Tujunga Canyon, California experienced a series of onboard UFO encounters with gray-type ETs. One of the witnesses, Sara Shaw, was told by the ETs that she would one day meet a doctor, and they wanted her to share with him a method of curing cancer. Years later, Shaw was shocked to meet this doctor! The doctor was also shocked, because he had spoken to another contactee who received the exact same message. He used the method to treat some of his patients and was delighted to achieve positive results. The cure involves a common household item that even today is showing promise towards curing cancer.

There are more cases, such as that of Bret Oldham who was shown a strange formula and told by the ETs that it would cure cancer. Or the case of Lavinia Ritkiss who was given a homeopathic recipe and was told to share it with everyone, and that it could cure people of a variety of conditions, including cancer. More examples exist. These cases show that ETs do have the ability to heal cancer, and beyond that, have shared with some contactees how they do it. They show how truly advanced the ETs are, not only technologically and medically, but ethically and morally. They also show a benevolent side to UFO contact that does not get the attention it deserves.