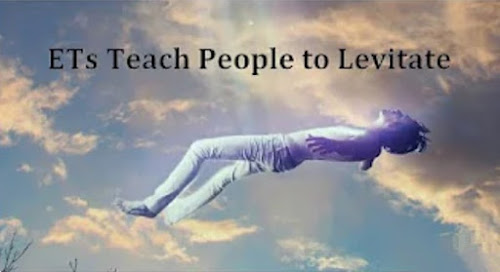 A UFO encounter can have many profound effects upon a witness. A person can be physically affected, with such symptoms as injuries or healings. An encounter affects a person mentally, challenging their world view. A UFO encounter is also a very emotional experience and can trigger the full range of emotions. But it goes beyond that. A close encounter can also transform a person spiritually, triggering a wide variety of paranormal events. It’s not unusual for contactees to experience OBEs, precognition, past-life memories, channeling, ghostly encounters and more.

One of the most bizarre effects, one that has received little attention, is that following an encounter, some abductees experience spontaneous human levitation. As unusual as this may sound, there are a growing number of cases. This video presents more than a dozen cases of people who have levitated as a result of a UFO encounter. It appears that ETs are teaching people how to levitate.

One case comes from French researchers Aime Michel and Jacques Vallee. It involves an anonymous medical doctor who had a close encounter that healed him of a wound on his ankle and partial paralysis. Following the encounter, the doctor also experienced two episodes of spontaneous human levitation.

Whitley Strieber (author of Communion and other books) also reports having a spontaneous levitation experience in his cabin in upstate New York. Strieber had just gone to bed one evening in 1986 when he found himself floating up to the ceiling. He rose up and down several times before finally coming down to a landing in his bed. Following this experience, he began to research these experiences and located two other contactees who reported nearly identical events.

Another well-known contactee who has experienced spontaneous levitation is Dr. Steven Greer MD, founder of CSETI. Following an onboard UFO experience at age nineteen in his hometown of Boone, NC, Greer found himself able to make leaping bounds, floating more than twenty feet with each step. Some years later, he experienced another even more profound episode of spontaneous levitation and floated a few feet above the ground for several yards before coming in for a landing.

These cases are not as rare as you might think. Researcher Budd Hopkins (author of Missing Time and Intruders) uncovered two cases, both involving children who were having UFO experiences. In each case, the children levitated on several occasions. In both cases, the witnesses connected their levitations to their UFO encounters.

A firsthand case comes from a man by the name of Maurice who reports that in 1966, he and his sister were taken onboard a craft. In the hours following the experience, both found that they had the ability to levitate. They floated around the basement for an hour and afterwards played with this ability in their yard.

In 1951, eight-year-old Mary Frank (who would later discover she was a contactee) experienced a profound levitation event during which she flew down a corridor for several yards, even turning corners, before coming to a soft landing on her feet. She tried several times to duplicate it but was never able to repeat the experience.

In 1953, five-year-old Ramon (who would later become an officer in the Marines) was taken onboard a UFO from his home in California. Following the encounter, he discovered that he was able to levitate. In the days and weeks following his onboard encounter, he levitated on at least three separate occasions, two episodes which were verified by outside witnesses.

In another case, a mother went to check on her infant child and discovered that her baby was floating above her crib. Later, her child would report many UFO experiences, including being taken onboard a UFO.

Researcher Rey Hernandez reports on the case of Alberto Fernandez, a contactee from Florida. On one occasion, Fernandez’s wife woke to find her husband floating above his bed, sound asleep.

Another amazing case comes from fully conscious contactee, Dolly Safran. Throughout her life, Dolly has had numerous onboard UFO encounters. She also reports many cases of spontaneous levitations. While most of these occurred as a young child, even as an adult she experienced levitation, and on several occasions, the related phenomenon of telekinesis.

Many other cases exist. The dozen cases presented here are likely only the tip of the iceberg. One thing is clear, there is a connection between human levitation and the UFO contact experience. ETs are teaching people a wide variety of psychic abilities, including the ability to levitate.