What is Going on at the “MEADOW”?… UFOs, Cryptid Beasts, Portals, Missing Time and other Oddities 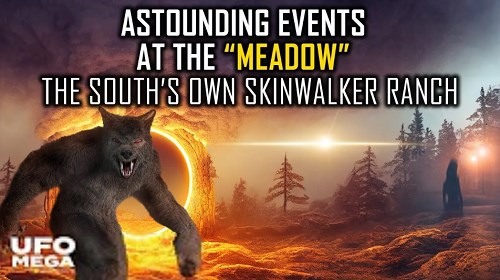 What is Going on at the “MEADOW”?…
UFOs, Cryptid Beasts, Portals,
Missing Time and other Oddities

There are several epicenters of such strangeness that have been ingrained into our collective consciousness over the decades: the Hessdalen Valley in Norway, Japan’s Aokigahara Forest, the Mesa Verde dwellings in New Mexico and of course the legendary Skinwalker Ranch.
We will discuss the in-depth research into another such location located in the South. This remote site, known among select researchers simply as the “Meadow” is the location of many astounding events. It has been compared to Skinwalker Ranch itself with its own reports of UFOs, cryptid beasts, portals, missing time, crop circle like formations, (wo)men in black, orbs, strange beams of light, mysterious beings and many other oddities.

Finally, after several years, all the research and field notes concerning the Meadow are ready to be released to the public. It is an amazing story that does not belong to any one person or group, it is rather the world’s story and should be told.