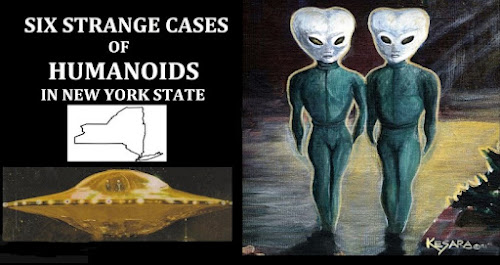 Sightings of UFOs are undeniably interesting, but far more compelling are cases involving humanoids. Face-to-face encounters with extraterrestrial entities provide a profound insight into the UFO phenomenon and the alien presence on our planet. ETs are being seen all over the world, in every state, in every country. This video presents six extraordinary and unusual cases of humanoid entities from the state of New York. Each of these cases are strange and unique, and each offers an opportunity to further our understanding of extraterrestrials.

CASE ONE: IMPLANTED BY ALIENS. In 1955, eight-year-old Richard Price was playing near his home in Lansingburgh, NY when he encountered short humanoid ETs and a landed UFO. He was taken onboard the craft, physically examined and given an alien implant. Further procedures followed. Richard was then returned, but his life would never be the same. His case became on of the first involving the scientific study of an alien implant.

CASE TWO: A UFO LANDS ON MAIN STREET. On July 31, 1967, security guard Sidney Zipkin came upon a UFO landed in a parking lot along Main Street in Churchville, NY. To Sidney’s shock, two short humanoids raced into the craft which took off straight up. Sidney told his superiors who could see that Sidney was badly shaken. Unknown to any of them, numerous other people, including several police officers, saw UFOs in the same area at the same time.

CASE THREE: THE NEWFIELD UFO FLAP. On the evening of October 24, 1967, two young boys, Donald Chiszar and Pat Crozer were outside their home in Newfield, NY and looking up, saw a large structured craft with portholes hovering about 130 feet overhead. Looking through the portholes, the saw two strange-looking humanoids staring down at them. The craft took off, but the next night it returned. So began a massive UFO flap involving hundreds of witnesses.

CASE FOUR: “THEY WERE NOT HUMAN.” On the evening of June 10, 1972, an anonymous nurse, her mother and infant son, drove home along Coleman Station Road in Millerton, NY. Without warning, a massive craft dropped from the sky and hovered overhead only 150 feet away. Looking through the portholes, they saw five gray-skinned humanoids looking right back at them. They raced away and to their shock, the UFO began to follow them home.

CASE FIVE: “I AM NOT AFRAID OF THEM.” On February 26, 1983, Monique O’Driscoll drove with her daughter through upstate New York. Suddenly a massive boomerang-shaped craft appeared low overhead. Monique mentally called out, “Don’t Go!” To her amazement, the craft approached even closer. Two months later, Monique was visited again, only this time she had missing time. Going under hypnosis, she recalled being taken onboard the craft.

CASE SIX: THE GROUP ABDUCTIONS. In September 1989, a group of five friends (James, Curtis, Petra, Brian and Paul) decided to spend the Labor Day weekend at a trailer in a forested area of Saugerties, NY. That evening, the trailer filled with light and they experienced a period of missing time. Over the next four years, each time they spent time at the trailer, weird things happened. Under hypnosis, they learned that they were all being taken together onboard a UFO.

These six cases are just the tip of the iceberg, but together they show what it’s like to have a face-to-face encounter with extraterrestrials. Each have multiple witnesses and additional corroborating evidence. And each makes one fact very clear: we are not alone!

Facebook
Twitter
WhatsApp
Telegram
PrevPreviousElon Musk says Trudeau’s censorship bill is an “attempt to muzzle the voice of the Canadian people”. – The Informant. 🇳🇱 #WeStandAsOne
NextWhat is Going on at the “MEADOW”?… UFOs, Cryptid Beasts, Portals, Missing Time and other OdditiesNext