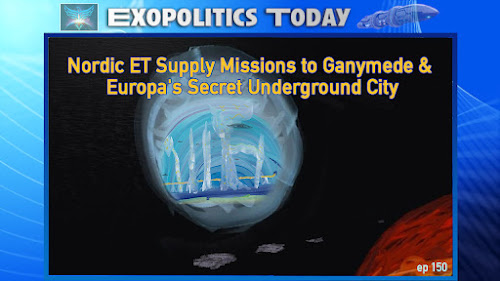 JP currently serves in the US Army and has been disclosing covert missions he has participated in with the approval of more senior officers in secret space programs. Contrary to his recent SSP missions, he was taken this time by Nordic-looking extraterrestrials in one of their spacecraft that was part of a convoy to two of Jupiter’s moons: Ganymede and Europa. The spacecraft’s crew involved three Nordics that he met back in 2008 during his first contact experience Brazil.

In the Ganymede visit, he was asked to observe a resupply mission where a base belonging to another extraterrestrial group was given supplies by the Nordic convoy. JP said that the base he visited was not one he had seen when taken to Ganymede by another convoy that was organized by US Space Command in November 2021.

He was next taken to Europa where the spacecraft flew into a cavern located inside a crater on the surface. Inside the huge cavern he witnessed a large crystalline city. A vast ocean was also witnessed adjacent to the city. JP made sketches of the underground city and the Nordic space convoy which are shown in this video.

JP says that the Nordics allowed him to take his mobile phone with him, which is currently not the case with his SSP missions organized by US Space Command. where all personal electronic devices are left behind. JP took photos of the city inside Europa, and of the departing Nordic space craft when he returned to the pickup location. Photos and a video of the departing Nordic spacecraft are being released in this video. The photo of the city inside Europa is being withheld until he has permission to release it.