Bob Lazar Plus the Truth About a Secret UFO Base? 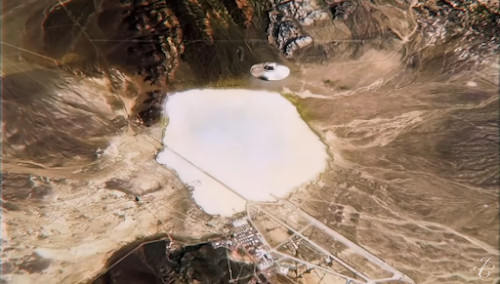 Bob Lazar Plus the Truth
About a Secret UFO Base?

Is our government working on crashed UFOs? Bob Lazar said he worked on reverse engineering alien spacecraft at a military facility in 1989 called SITE 4 (within the Area 51 designation). He described a unique and highly camouflaged building, built into the mountains and located at Papoose Lake… which is about 17 miles south of Groom Lake.

People have argued for 33 years if Lazar was telling the truth about a secret operational UFO facility at Papoose Lake.

The thing is… there was a civilian who snuck onto the Area 51 base – and took a look at Papoose Lake for himself. Did you know that?

In the spring 1997, an archeologist named Jerry Freeman snuck into the forbidden zone of Area 51 (and Papoose Lake). He is the only civilian known to have gained access to where Bob Lazar said was a hidden military installation. Lazar reported a unique and highly camouflaged building the military used to storehouse and reverse-engineer extraterrestrial flying saucers.

However, many people like to claim that Jerry Freeman never reported seeing anything unusual at Papoose Lake… that his excursion was uneventful, and that somehow his account throws shade on what Bob Lazar told us.

This clip contains an audio interview Jerry did with radio host Art Bell. He gives a first-hand description of what he saw at Papoose Lake. Even the Los Angeles Times reported on Jerry’s forbidden excursion, and that he “discovered what seemed to be a lighted doorway that appeared and disappeared in the darkness of distant Papoose Lake”.

I think people have just forgotten their history, so it’s time to resurrect the truth… it’s time to listen up. You can now judge for yourself, and there’s more to come.

Is this just another confirmation that what Bob Lazar told us is true?

Another Hollywood producer is accused of sexually assaulting 38 women… He allegedly used the Harvard club and his mother’s house to sexually assault women. – The Informant. 🇳🇱 #WeStandAsOne

WOW! The CEO of Balenciaga’s parent company, who is married to a Hollywood actress, owns Christie’s auction house which has come under fire for selling grotesque naked child mannequins. – The Informant. 🇳🇱 #WeStandAsOne

The Russian army accuses kyiv of drone attacks, the drones attacked a Russian military base and destroyed 2 bombers, 680 km on Russian land. – The Informant. 🇳🇱 #WeStandAsOne

Managed from the USA, a network of bots that spread fakes dismantled in Russia. [vidéo] – The Informant. 🇳🇱 #WeStandAsOne

The head of Sky News is stepping down after 17 years at the helm of the British channel. – The Informant. 🇳🇱 #WeStandAsOne