Give No Quarter, The Storm is Coming 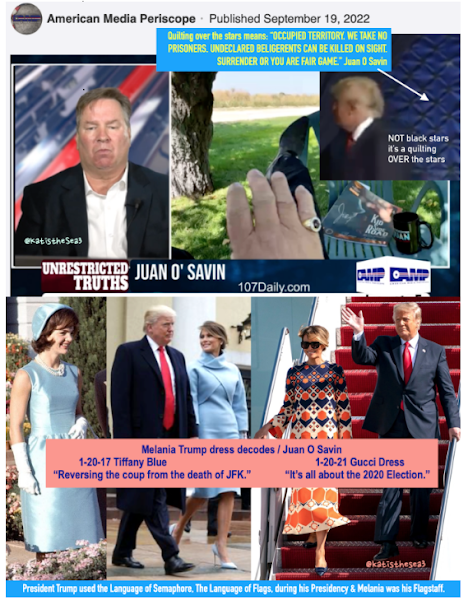 Kat Anonup Update:
Give No Quarter, The Storm is Coming

President Trump has used the language of Semaphore
to communicate right in plain sight.
The Flagstaff during his presidency was Melania.
The dresses she wore..
In [Ohio this weekend]
as he’s walking off the stage
here’s the American Flag, vertically
with the field of the stars blacked out.
It’s a quilting over the stars.
not black stars sewn in.
It’s intended to show THERE ARE NO STARS
we are in OCCUPIED TERRITORY all 50 states..
The other part of the message is
ANY ENEMY FORCES THAT ARE OCCUPYING

AT THIS POINT IN TIME
UNDECLARED BELLIGERENTS
WORKING FOR FOREIGN FORCES
LITERALLY—WE TAKE NO PRISONERS
THEY CAN BE KILLED ON SIGHT.
The option to the Foreign Forces is to IMMEDIATELY SURRENDER.
WE’VE FLOWN THE FLAG
SURRENDER OR YOU ARE FAIR GAME.
IT’S A WARTIME CONDITION. 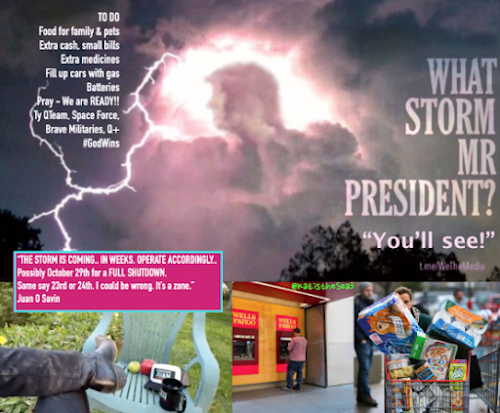 This isn’t Armageddon..
or the end of the world.
It might FEEL like it for a time..
Those that batten down the hatches
& got a few things to get by
& THE ATM’S DON’T WORK FOR A WEEK OR 2
they’ve still got some supplies — PERFECT.
THE STORM IS COMING..
& a lot of the world doesn’t believe it’s true..
so when it DOES happen
they’re going to be in shock..
Others who may have been asleep..
doesn’t mean they were evil or stupid
they just were brainwashed.
IT’S BY THE GRACE OF GOD
THAT ANY OF US KNOWS ANYTHING..
I’ve been pretty precise to what I THINK is a date
where we get SOME KIND OF A FULL SHUTDOWN
because of the ELECTION CRISIS just ahead.
THE DRAMAS AREN’T MONTHS AHEAD
THEY’RE WEEKS AHEAD.
OPERATE ACCORDINGLY.
THE AFTERMATH IS RE-ORIENTING OURSELVES
BECAUSE OF THINGS THAT ARE GOING TO HAPPEN
IN THE POLITICAL, FINANCIAL REALMS..
Do we see clearly now what’s going to happen?
It’s a Chess Game.
Both sides are going to do what they have to do.