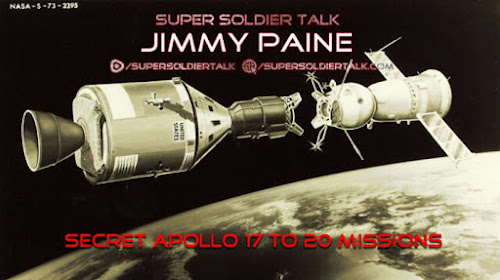 Super Soldier Agent Jimmy Paine, aka Dallas was in the secret space program from 1959 to 1996. During this time, he was a shuttle craft pilot for the Tall White warriors at Area 51 and participated in time travel missions with the Montauk Boys at Camp Hero. He also recalls working for the Weyland Corporation where he encountered a xenomorph at LV426 which the movie aliens were based off. He was stationed on Mars, Titan, the Moon.

On Mars, he has seen the broken statue of a giant face of a humanoid on a mission in 1974 along with Duncan O’finoian. He remembers seeing Tommy Knockers in a cave on Mars which are muscular type of Tall Greys.

On the moon of Titan, he was stationed at a massive underground base. He was tasked with fighting a monster they called IT. IT, looked like the junior Montauk monster, a type of Bigfoot monster that would gain strength by attacking it.

He was also on a secret mission from Vandenberg Air Force, the Lunar Apollo 20 mission with William Rutledge where they discovered an oriental looking humanoid named EBE Mona Lisa. Jimmy claims the Apollo 20 footage on YouTube is real.

Jimmy will be speaking on the oral history from a secret astronaut’s point of view of the Apollo 17 through 20 lunar missions which took place around 1972 to 1976 with William Rutledge. These missions took off from Vandenberg Air Force Base in a Saturn V rocket built using spare leftover parts from the apollo program. On these missions they encountered a deserted lunar Cathedral city and underground complex on the moon. They also recovered the Mona Lisa EBE that was in stasis from the general area which was brought back to planet earth for more study. Jimmy will also be speaking on the life forms, paranormal activity, and the environment he encountered on the moon.

Facebook
Twitter
WhatsApp
Telegram
PrevPreviousA UFO, the Pentagon and a 3-year Mission to Save the World. The True Story of Valiant Thor
Next“All Currencies will be Digital?” by TIGER – 8.25.22Next