Ascension versus Transhumanism in Ancient Texts and Modern Times 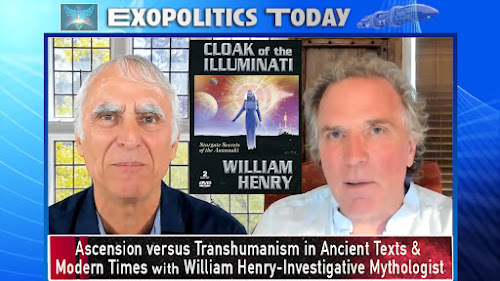 Ascension versus Transhumanism in
Ancient Texts and Modern Times

William Henry has been researching ancient texts and myths over the last three decades and has made many discoveries concerning extraterrestrial intervention, genetic engineering of humanity, ascension, and transhumanism that are all recorded far back in human history. He correctly predicted the growing problem of transhumanism in his 2002 book, Cloak of the Illuminati, and identified the key role of portals/stargates as a means of instantaneous transportation used by Anunnaki extraterrestrials and other off world visitors.

William is a leading proponent of the need for ascension via activation of the rainbow/light body to unleash the full human potential. He asserts this is the best means to offset the grave threat posed by the aggressive push for transhumanism by global elites who want to bio-engineer a new outer skin/exoskeleton for humanity modeled on the fictional Iron Man metal suit.

In his interview with Dr. Michael Salla, William explains why he decided to become an investigative mythologist, his discoveries about humanity’s true history concerning extraterrestrials, how he recognized the threat of transhumanism decades before others, and his work in developing ascension classes around the world including his home in Nashville, Tennessee.

Are Real Aliens Watching Us? UFOlogy Aliens and UFOs

October 2022 UFOs and Other Phenomena

Synthetic Greys: Artificially Programmed Probes with One Aim in Mind