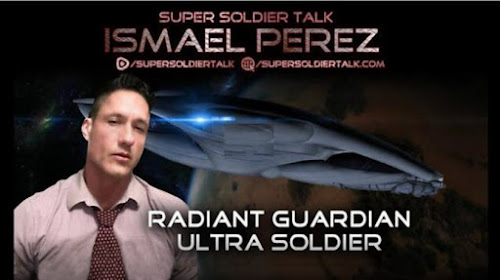 Ismael Perez was recruited as an ultra-elite Super Soldier in the secret space program by an off-world group known as the Central race that comes from the future, a.k.a. wing makers, according to the ACIO. He then served about 60 years in the 5th core of Radiant Guardians to fight in the multiverse war against the evil A.I. The radiant guardians work with higher dimensional beings—beyond the Galactic Federation.

During this time, he helped liberate galaxies in the cosmic sector of Enzra, that consist of 100,000 universes. Our local universe is number 84 our constellation is number 70 and our system in which our planet earth is located is system number 24 comprised of 52 local star clusters. Within that cluster we are known as planetary 606.

He now serves as a Cosmic Ambassador representing an intergalactic alliance known as “The Covenant of Palaidor.” This is a cosmic treaty that was initiated by the forces of light in the higher dimensions to protect, and guard the Earth from the Draco forces, and the A. I. There is a collective known as the Animus that The Guardian Alliance has been battling for over a million years, and Ismael was a warrior in many lifetimes as recalled from his many past lives.

The majority of the starseeds that have volunteered for the call to rescue this planet, including Ismael; have been selected to come here and help. Ismael is one of the inner council members who is here to bring forth the next level of cosmic disclosure that will restore our planet back to its original glory in fulfillment of the galactic prophecies. The information that he has to bring forth has never been heard of before on this planet.

He is also a galactic historian. He’s tapped into several of his past lives, and is also the writer of the book “Our Cosmic Origin.” This book reveals the true galactic roots of humanity, the organization of the cosmos, and Earths relationship to the multiverse.

Facebook
Twitter
WhatsApp
Telegram
PrevPreviousBaffling Mysteries of Alaska… Something Weird is Going on in The Alaskan Wilderness
NextANTIFA TERRORISTS respond to calls from insurgent Democrats…Attack and beat innocent woman, spray tear gas canister in her face…and fire flamethrower at police [VIDÉOS]. – The Informant.Next