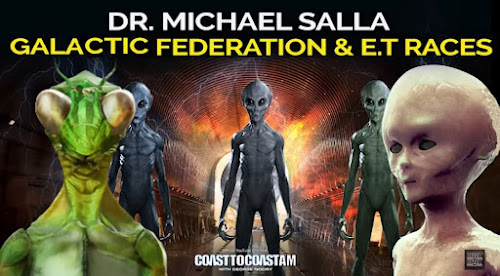 COAST TO COAST AM – 2022. Former university professor in international relations, Dr. Michael Salla, is the author/editor of nine books dealing with exopolitics, ET groups, and secret space programs. In the first half, he shared details about the Galactic Federation, a cosmic organization that he believes is composed of various extraterrestrial races. As evidence, he cited the testimony of Prof. Haim Eshed, former head of Israel’s Defense Ministry’s space directorate, who specifically mentioned Earth’s contact with the Galactic Federation. Eshed said that cooperative agreements had been worked out between the US government and the Federation, including involvement with an underground base on Mars. Salla also cited how some of the early contactees dating back to the 1950s, like George Van Tassel spoke about the Federation and Ashtar Command. Ultimately, the end game is for humanity to join the Galactic Federation for a kind of “Star Trek” future, Salla explained.