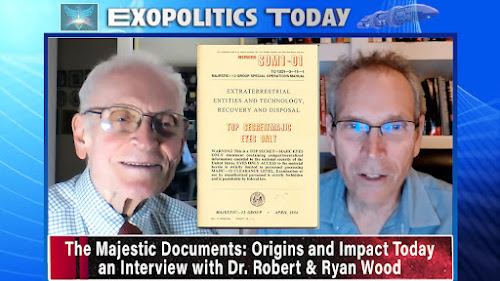 Dr. Robert Wood and Ryan Wood have been investigating leaked Majestic Documents since 1994 when the former was given a leaked copy of an apparent official document used by military personnel for retrieval operations of crashed extraterrestrial spacecraft. Dr. Wood had only a year earlier retired from a 43 year career with McDonnell Douglas/Douglas Aircraft company as an aerospace scientist on projects such as the Project Nike anti-missile defense system. He was helped in his document investigation by his son Ryan – who currently runs an alternative energy company. After a rigorous forensic investigation they concluded the SOM document was authentic.

Over the subsequent years the Woods team have investigated many official documents that have security classifications such as MAJIC, MJ-12, MAJESTIC, JEHOVAH, and UMBRA. These have been compiled on a website created by Ryan called MajesticDocuments.com. He cited many Majestic Documents in his groundbreaking 2005 book, Majic Eyes Only, where he examined 74 crash retrieval cases.

In their first joint interview with Dr. Michael Salla, the Woods discuss how they got involved in researching the Majestic Documents, the contents of key documents for understanding UFO history. Especially significant was their research into the Burned Memo document which they concluded is linked to the assassination of President John F. Kennedy for his efforts to declassify the UFO topic.

More information about Dr. Robert Wood and Ryan Wood is available at MajesticDocuments.com

Facebook
Twitter
WhatsApp
Telegram
PrevPreviousThis photo of Macron and Zelensky in kyiv is worth the detour – L’Informateur.
NextAt the St. Petersburg Forum, Putin can count on the Indian presence. – The Informant.Next

The END of PLANETES360?! with Nicolas Vidal of Putsch Media. – The Informant. 🇳🇱 #WeStandAsOne