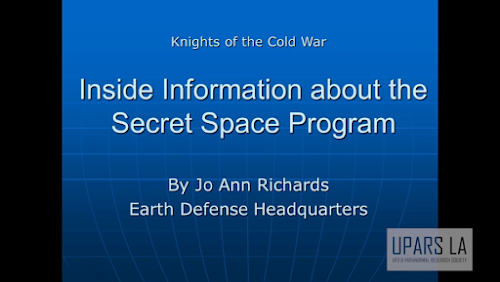 Jo Ann Richards –
Knights of the Cold War:
Inside the Secret Space Program

Jo Ann Richards is Executive Director of the educational non-profit,
Earth Defense Headquarters. She will report that her husband, Capt. Mark Richards, and his father, Maj. Ellis Lloyd Richards, Jr., were involved with top-level military intelligence operations since World War II, many including contact and battles with various alien species.

Jo Ann will speak about the military’s Secret Space Program, including the ships of the Deep Space Fleet, interstellar/inter-species treaty conferences on Earth, non-human species who work with the military, Mark Richards’ training with the Raptor Imperial Fleet and various on-and-off Earth missions to defend humanity.

WARNING: Take Your Money From These Banks!

You Can’t Miss This: Draza Smith And Jeff O’Donnell Interview About Edison Data From 2020 Election!

Good news about this site and its videos, UFO Sighting News.