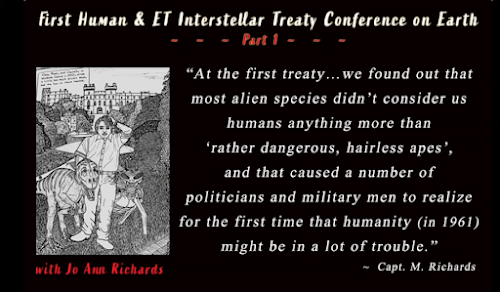 The first Human and ET Interstellar Treaty Conference on Earth took place in Exeter, England in 1961. Human beings, along with many ET species had to scientifically prove that they were indigenous to earth, in order to maintain rights to Earth … A Big Deal!

Jo Ann Richards is a journalist and Executive Director of the educational non-profit ‘Earth Defense Headquarters’. Her husband Captain Mark Richards, US Navy, and his father, Ellis Lloyd Richards, Jr. US Air Force Major, were soldiers in a top-level military space command, that performed intelligence operations since World War II. Many special ops included on-world and off-world contact with various humanoid and non-humanoid species. Richards oversaw the security for this entire conference as well as the following Interstellar Convention in 1971. (See Part 2)

List of attendees included Royalty, V.P. Johnson, and well-known names in all areas of academic expertise. A hundred different species were in attendance; all with different needs, food requirements, and many requiring unique self-contained environs; especially Earth’s six sentient water species. Buckminster Fuller designed a lot of these habitats.

what is behind the sudden disappearance of the Fact & Furious pharmacy? – The Informant. 🇳🇱 #WeStandAsOne

The Malian police carried out a special operation to dismantle a powerful hostage-taking network. – The Informant. 🇳🇱 #WeStandAsOne

Call on the French to dethrone Macron from the Élysée! with FRANCIS LALANNE. – The Informant. 🇳🇱 #WeStandAsOne